Computer that we use so freely today is a product of years of work by Konrad Zuse (Ceruzzi 1981). Zuse would be amazed at the way the modern world has used his simple invention.

The modern computer has become a necessity in our lives, simply because of its adaptive, open and communicative system. With its unique properties of self-organization that are reminders, antivirus clean ups and scalability (Hill 1990) can take on large tasks and simplify it for any human (Zhou et al. 2010). When John McCarthy coined the term artificial intelligence, little could he have predicted about   the level of intelligence modern computers and other systems would ever achieve (McCarthy 1998). It was Zuse who went so far as to say that the entire universe is run by a computational technology (Zuse 1967).

The year of interface between innovations and  ecosystems of intelligence

Experts have said that the 10 years between  2004-2014 had been the playground for startup innovations like Instagram, Twitter, Zip-car, You tube, TripAdvisor or Airbnb (Abbott et al. 2013; Geron 2013; Hochman & Manovich 2013). In 2014, we stand at the interface between two dimensions; the physical and the virtual reality. The twain meets at the interface dimension of intelligence, powered by computer devices.

Most of the modern computer devices cannot function in isolation. They need to be connected to other devices for optimal use of their functionality. The edge devices like the Smart phones of today make human beings so endowed that they can connect through cyber ecosystems which respond in real time to their environments. So 2014 is the hub of all the activity involving rich user experiences that allow for intelligent decision making (Chatzimilioudis et al. 2012; Clinch 2013).

The decade of connected intelligence

The decade starting 2014 is the start of a decade of connected intelligence that supplements the human brain in every aspect. Automating processes and giving us the boon of having more control over the physical and digital world.

The fourth industrial revolution of intelligence

Bill Gates once said,” The internet is becoming the town square for the global village of tomorrow  (Gates 2000). And that tomorrow has arrived in 2014.  The Digital Revolution, (Third Industrial Revolution) of the 1950s’ – 1970s’, has recently paved the way into the Intelligence Revolution (Fourth Industrial Revolution) making the world smaller, faster and better in decision making than ever before. The changes introduced due to digital computing and communication technology has created digital circuits that have revolutionized the processes of informed decision making.

The digital ecosystems that we use, when we live in the modern world, help us classify content and applications, cover a wide range of websites, identify and detect new threats and control access to our computers according to our needs.

Has ecosystems of intelligence made man less vulnerable?

The best example in this case would be from the world of business. Traditional giants which had shown a slowdown in their share value, in the last decade, have jumped right back on the bandwagon. Companies like Coca Cola, (Vrontis & Sharp 2003) Procter & Gamble, (Dodgson et al. 2006) Tesco, (Plimmer 2010) Disney, (Bishop 2003) are but a few of those 2000 companies that have opted recently to go digital. They are no longer solely dependent on traditional advertising to build up sales.  They are all those companies that have intelligently taken hold of their digital destinies and are writing their own future.

An increased visibility in the digital world is translated into better profits. Tesco has created interactive grocery stores with movie streaming, e books and its own seven inch tablet priced as low as a 100$. GE has made major advances in building up cloud based services (Zhang et al. 2010) to collect and combine vast amounts of industrial machine data and equipment data to set new performance standards in major industries such as energy and aviation. Digital expertise and knowhow of digital ecosystems can help these bigwigs control their own markets along with creating new business and market models for others to emulate. Digital strategy and business strategy are no longer separate; the twain has met in the digital ecosystems.

Man and its machines of intelligence

In a world of nonstop change, there is no time to smell the roses or to catch up.  It looks like new devices with something fresh to add to our available armory are at a virtual impasse for the present. Instead man has started creating interfaces to connect the world through the internet.  He has at last become aware that the intelligent use technological breakthroughs can make him a master orchestrator of his own destiny and reinvent traditional organizations or systems to get into the fore front of the dramatic changes in business and creation. The need of the hour is the intelligent use of the technology and the applications available to us. We should not take the world to a stage of virtual cacophony through digitalization. It is entirely up to us to combine blogging, googling and customer service in order to create an intelligent, well informed and satisfied end user. In conclusion, 2014 is the year of the disrupters who have, by their intelligence, revolutionized the digital ecosystems around us and made a unified world with similar dreams, aspirations and hopes. 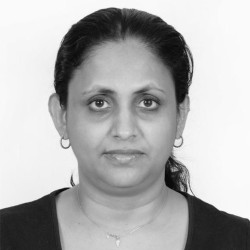 Anjum John
Anjum, who holds a Master's degree in Public Health Medicine. As a student, she has worked on epidemiological projects like " The epidemiology of obesity in rural Kerala" and " Assessment of injection practices in India (AIPI)- An INCLEN Study". She started her academic career as an Assistant Professor and has furthered her knowledge base by specializing in Medical Research Ethics (CIP certified) and Research Administration (CRA holder).She is a quick learner who welcomes changes in her life with an open heart and positivity.Her " never say die" attitude has stood her in good stead in life. Apart from academic pursuits, she has taught herself the arts of crocheting, cooking and is an avid gardener.